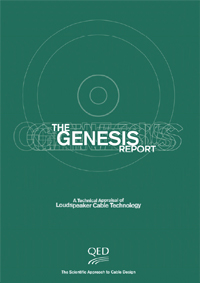 Below you will find the science behind our sister company QED’s approach to producing HDMI cables, Speaker Cables & Speaker Termination.  Before we give you an overview here are some words from the founding father of QED

In 1995 we published the Genesis Report on loudspeaker cable design. In that document we established design principals, scientifically proved, which are as valid today as they were 12 years ago. This longevity is an unequivocal endorsement of both the quality and depth of that original scientific research. The Genesis Report laid the foundations on which we based all our subsequent loudspeaker cable designs, from QED Original, though to Profile, SA-XT, X-Tube and of course Genesis.

Genesis II embraces the modern A/V and digital world we all now inhabit. It explains how many of the principles that apply to analogue cable design are equally applicable to this new digital age.

I believe it makes fascinating reading. 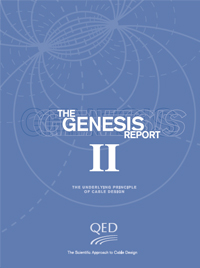 The once humble loudspeaker cable has seen a meteoric rise in importance in recent years. Previously almost an afterthought, cables are now crucial high-technology audio components in their own right, though often cloaked unnecessarily in mystery and intrigue.

There is now a vast choice of different cable types, designed to suit every need. Unfortunately, consumers are now confronted by a bewildering array of claims and counter- claims, turning what should be a straight forward purchase into something of a nightmare! This situation is not helped by the mysticism and pseudo-science which is all too often used by some marketing departments.

This technical guide is a summary of in-depth scientifically-conducted research, with measurements and listening tests, carried out by QED into loudspeaker cable effects. Our aim was to develop new ranges of high-performance cables based on the results of these investigations and the current QED loudspeaker cables were developed as a direct result. Many lessons were learned, which have also influenced our interconnect cable design.

The listening sessions were vital: QED engineers are all too aware that measurements alone are not the whole story. It would be tempting to claim that they tell you everything, though this is clearly not the case. On the other hand, if any cable introduces measurable errors and distortions as a result of being inserted between the amplifier and loudspeaker, it obviously cannot reproduce music accurately.

QED believes cables should be as accurate, transparent and neutral as possible and it is with this credo that our cable development is undertaken, based on Genesis and guided by exhaustive listening evaluations.

Around the world, the debate continues amongst both audio and videophiles, as to which cable designs offer the best performance.

QED, an established market leader in this field, has won many coveted awards for its high performance audio and A/V cable products. Key to this success has been the application of strong engineering principles, coupled with extensive test and measurement of both our own and competitor’s products.

In this report, we re-visit some of the areas covered in QED’s original 1995 ‘Genesis Report’ and also investigate in more detail the underlying principles of how cables work. Included are the various fundamentals relating to signal transmission that are scientifically intriguing and also central to developing cables that really do perform better, for both Sound and for Vision.